IT STARTED WITH A ‘POP’

It all started with a pop and swiftly moved on to a bit of zig-zagging, one or two choice words from hubby and the realisation that we had a puncture.  In fact more than that – a rather large rip!

We were only passing through Wales as a means to an end – the ferry from Pembroke would take us to Ireland to visit our grandchildren.  It was 12.45am and with only 36 miles to go we had plenty of time to catch the 2.45 am ferry – or so we thought.

A tyre sealant kit is no good when you have a 6 inch gash in your tyre and not many Kwik Fits are open at that time of night.  Anyway we weren’t terribly sure where we were.  It’s dark in Wales at night!

While hubby was stomping about outside I rang our road cover – we have one of those ‘all-in-one’ policies with our bank.  It’s worked for us a few times so we won’t be claiming it was mis-sold! I had to ring the bank as we hadn’t brought our policy document with us (there’s a lesson) so the biggest challenge was remembering our telephone password.  I did get three chances at everything so by a process of elimination I managed to pass the test!  They put me through to breakdown and the lovely Gina helped us out.

We elected to have a mobile tyre fitter (fighting chance we might still make the ferry).  Then we only had to figure out where we were – isn’t modern technology wonderful – what did we do before mobile phones!  Gina wasn’t Welsh though so we had to spell a lot of words!

I watched the clock (every 10 seconds).  I needed a diversion to make the time pass.  I now have beautifully painted nails with no chips or raggedy bits – bright pink!  Hubby was speechless – well sort of.  I think that’s when he started waxing lyrical about the nonsense of selling cars with no spare wheels and ‘who decided that was a good idea’!

A lovely welsh guy turned up and changed the tyre in about 5 minutes – not quite Grand Prix standard but not bad.  He would have chatted forever but I think he got the drift that we were in a hurry.  We paid him £120 and off he went after leaving his mobile number so we could let him know if we caught the ferry.

Could we do 36 miles (on windy welsh roads) in 25 minutes?  The answer was no!  The ferry was still alongside but the dock gates were well and truly shut. 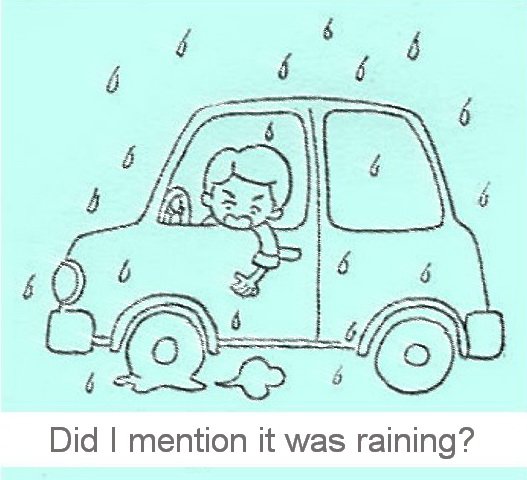 Next stop the Travel Lodge – no room at that Inn.  We were directed to a small Hotel by the dock called The Dolphin with a ‘You might get a room there’.  It was 3.00pm in the morning and all self respecting Hoteliers would be in bed (we thought) so this place didn’t sound 5 stars.  But any bed sounded good – ours for that night had sailed with the ferry.

It didn’t look promising (Victorian frontage straight on to the pavement and all in darkness) and hubby was all for sleeping in the car on the basis we would run out of money before we even got to Ireland.  But I saw a glimmer of a downstairs light and nervously knocked on the door.  It was opened immediately (didn’t get anyone out of bed then!) and they had a bed.  Hurrah!

We paid £50 up front by credit card – all cash had gone to the tyre fitter!  The bonus was that breakfast was included and we could have that any time up until 1.00pm.  That was a result as the next ferry wasn’t until 2.45pm and sleeping the time away seemed like a good option.

The Dolphin hotel more than met my criteria for a bed for the night – clean sheets, hot water and a nice, spotless room with en-suite (small but perfect for our needs) – my next stop is Trip Advisor – 5 stars!  And that was before we had breakfast – also great!

What happened about the ferry?  I rang the ferry number in Liverpool (in the middle of the night you can get a recorded message about anything except what to do if you miss the ferry – office hours don’t start till 9.30 am).  A very nice lad with a scouse accent sorted us out and I found myself saying thank you so much for your help and trying to make him feel better for taking another £58 from my credit card.

The moral of this story – don’t buy a car without a spare wheel!   But we had a good time – people were nice, friendly, helpful and wanted to solve our problems  - 10 minutes earlier would have been better of course but you can’t have everything.  And I do have beautifully painted nails.

Just remember – spell STRESSED backwards and you get DESSERTS.  We went with chocolate, chilled out and called it an adventure!