Memories are made of this – and a few family rocks! 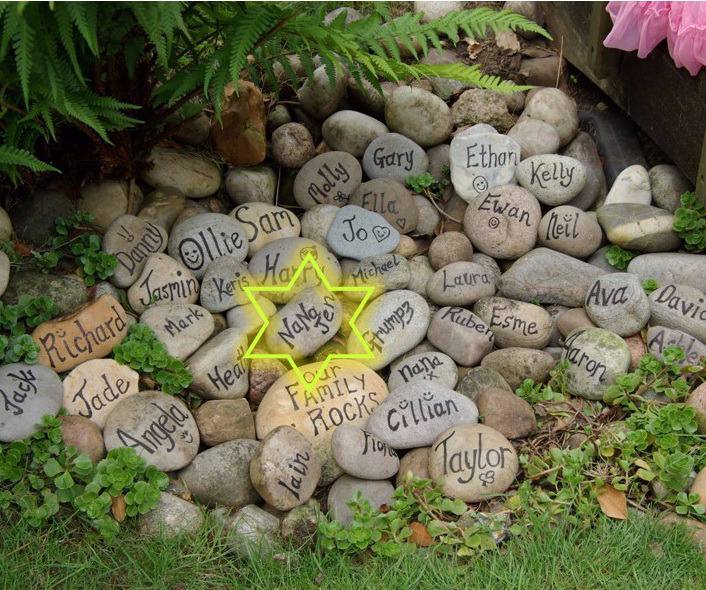 Jenny was my mother in law.  Of Scottish origin (as I am) she had a strong Glaswegian accent and a very loud voice but was someone you grew to love as you got to know her better.

More accurately she was my ex mother in law but when I divorced her only child, I told her that she could see her grandchildren (my two sons and a daughter) whenever she wanted to.  So this brusque, sharp, stubborn and determined lady (who was a big softie underneath) remained well and truly part of the family.

I re-married 30 years ago and my husband acquired my 3 children and two mother in laws as part of the package – he didn’t know what he was taking on but he stuck with it!  He had 2 children close in age to mine and that was the start of our extended family.

My mum and Jenny were good friends – they lived in the same part of Scotland and we lived in England so eventually they started to visit together – for nearly 3 weeks every summer (they liked to have 3 weekends at least!) and some family occasions in between.  We have 12 grandchildren, their great grandchildren, who just thought that great Nan’s came in pairs!

The double act of Nana Jen and Nanny Mag remained until 5 years ago when my mum passed away at the age of 86.  That was at the same time as I was diagnosed with a life threatening illness.  Jenny filled a gap left by my mum and was a great support to me.  She had become close to my husband too over the years and the words ‘in-law’ were all but rubbed out.

The great grandchildren range from 20 down to 2 years of age.  As each one arrived she shouted at them (in the nicest possible way) in her strong accent but the fear and trepidation disappeared when they realised it was her default voice – except for the youngest one who roared back!  They had a great affinity and a strong bond – I wonder why?!

Now Jenny has gone, 5 years to the day that Mum went and also at the age of 86.  Their passing has somehow been brought together and I am grieving for them both but in a celebration of what they meant to us rather than any great sadness.

We have had many happy times, annual barbeques when the whole family got together and we slept dormitory style to fit everybody in.  All the weddings, christenings, birthdays and special celebrations – the two Great Nan’s were always there.  Nothing would keep them away.  As they got older we persuaded them to fly from Scotland – Ryanair would only accept a passport or a driving license as ID.  For my Mum (who didn’t drive) a driving licence would have been a bit of an ask at 80 so who else do you know has needed a passport to fly from Scotland to England!  That became a great story they loved to tell.

We’ll meet for the barbeque again this year and things will be different – but the many, many memories that we have will keep them with us.  Even the younger great grandchildren who will be told the stories many many times.

So make your memories while you can and then keep them safe – you’ll need them!

And as for the two Nan’s – they talked constantly so if they’ve met up again they are probably having a good old natter and catching up on the last 5 years.